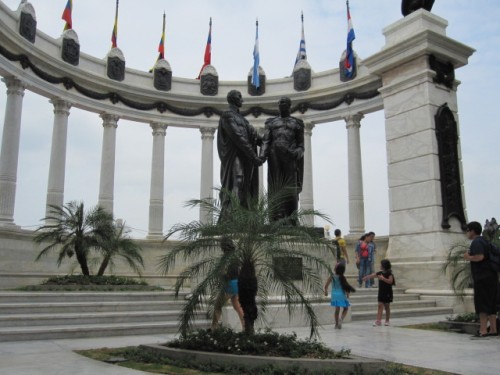 Last week I wrote you about a few things you should have warned me about BEFORE I came to Ecuador!

Turns out I forgot a few more…

16. That Ecuadorian men, especially taxi drivers, think of the streets as their private urinal.

18. That Ecuadorians don’t line up, they swarm.

19. That Ecuadorians aren’t big “joggers”, meaning if you see a few people running in the streets in the middle of the day you know it means someone just got robbed.

20. That Ecuadorians probably won’t have change… even for your $5 bill!

21. That Ecuadorians in small towns on the coast love to put hidden speed bumps along the main coastal road just for kicks as outsiders lose their suspensions and shatter their teeth.

23. That on Sundays the small towns turn literally into “ghost towns” with everything closing meaning if you didn’t prepare beforehand you’ll have to rumage through the garbage to survive (or live off Doritos).

24. That once the food is served the waiters job is considered finished and will disappear out the back for a smoke.

25. That you will need to have important matters explained through translators who speak worse English than you speak Spanish.

26. That even though Ecuador is a coffee producing country, all that will be offered to you is NesCafe. (Unless you’re in Loja.)

27. That Ecuadorian drivers don’t care what happens behind them, they will turn on their emergency blinkers and stop anywhere and block traffic without a care in the world.

28. That Ecuadorian government employees will give you the wrong information, then take no responsibility for it.

And once again, despite all these setbacks I’ll still be glad I came!

Oh yea, and that signing up for my weekly newsletter on Ecuador living was the best decision you’ve made in your whole life! You can unsubscribe at any time: