“Jeeze, I’ve never seen a road like this,” I thought, this week, as my teeth rattled and face winced along one particularly trying road deep in a palm oil grove. Not only was the road bumpy, but the bushes were scraggly and were impending the vehicles. The track could have had used the services of Fast Tree Removal company.

I was in one of the top places in Ecuador for palm oil growing, La Concordia, a small town tucked deep in the sticks about a half hour from the rough and tumble city of Santo Domingo, Ecuador.

You gotta put your money somewhere.

Keeping it invested in paper US dollars is a well-documented no-no.  Gold may be a better bet, but lets face it, if sh#t really hit the fan, people don’t need it, they need food, they need water.

That’s why one of my next plays will probably be in an agricultural investment, and honestly, its hard to  beat Ecuador for that.

The land is so fertile (and relatively inexpensive).  And farm hands come cheap.

There’s so much water.

Need a specific temperature?  Just find the right altitude in Ecuador, cause its there.

My Ecuadorian friend, and also active palm grower, who I met at a conference I was teaching at this week in La Concordia began to explain…

“Palm Oil is one of the most profitable crops Ecuador has to offer.  At least in this area.”  He started.

Palm Oil is mainly used for cooking, and primarily exported.  The oil is obtained through the fruit this particular variety of palm produces. 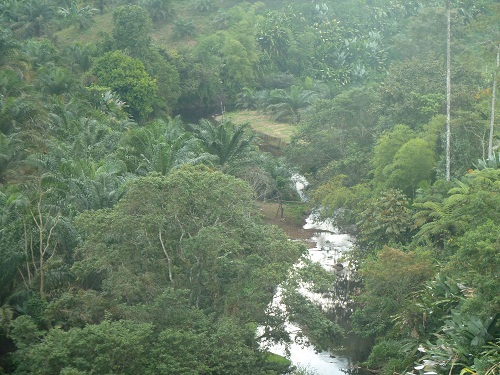 Palm oil trees begin to give fruit around year 2, and continue to do so until they are about 25 years old.

Once harvesting begins, you’ll continue to harvest every 20 days for the life of the plant.

One big plus of this product is that it is relatively NOT very labor intensive.  No constant watering is needed.  There is a rainy season, starting in January which then goes for a few months, and that is when the plants receive the water table they need for the year.

Most small to medium sized palm farms (20 hectares or less) don’t even have any full time employees, just one live-on watchman.

All farm owners do is hire two guys to come to harvest every 20 days.

One plucks the fruit off the trees with a hook, the other one loads the fruit on the donkeys which take it to the trucks which then take it the nearest factory that proceeds to cook the plant and extract the oil.  They are paid based on output ($15 per harvested ton).

This is another one of those products where no marketing is needed.

You make it, you’ll have a buyer, which is usually the nearest production factory.  As a marketing guy I appreciate that.

The only thing that changes is the market price.  Which for this product doesn’t fluctuate too greatly which usually resides between $150-250 per ton.

Farms start to become particularly profitable when they are at least 20 hectares large.

Each hectare can fit 140 palms.

You can buy the palm trees an inch tall for $1.  Or you can buy them already a year old for around $6.  The best time to plant new palms is in late December or January when the rainy season begins.

You’ll need to invest about $1 in fertilizer per plant twice a year to keep the plants healthy.

You’ll also need to pay a worker $.15 cents per plant to clean the shrub away from around the basin of the plant.  Three times a year.  This comes to about $63 per hectare per year.

You’ll also need to fumigate 2 or 3 times a year which costs around $50 per hectare.

You’ll also need to pay the trucks (considering you dont have one) about $5 per ton for them to haul your product to the processing factories.

“My costs usually run around 20% of my sales in this business.” My friend continued.

One big benefit is that palm is not something that is often stolen, like other crops, due to the weight of the product and also that the factories will not buy stolen product.  They will only accept product with registered tax Id numbers (RUC).

Also, due to the low maintenance and lower risk of robbery, being an absentee owner is more than commonplace, it is the usual.

So no, you don’t have to live there,

Each hectare of producing Palm can produce on average 2-3 tons of product every 20 days.  The really effcient farms, like a few in Ecuador and many in an experienced Palm oil producing nation like Malaysia, can often produce up to 5 tons of product per hectare.  Each ton sells for the market price which fluctuates around $200… leaving $150 in profit per hectare for the farm owner…

So for a 20 hectare farm that means in the worst case scenario with low market prices ($150/ton) and a farm producing a mere 2 tons per hectare would produce $6000 in monthly sales and leave a profit of around $4000-$4500 a month.

For that same 20 hectare farm at the best case scenario with higher market prices (around $200/ton which the factory pays you the farmer) and a highly efficient farm producing 5 tons per hectare the monthly sales can be as high as $20,000 per month.  With about $13,000-15,000 of that being the estimated profit.

The investment and ROI…

Land ideal for palm growing in the area that is not harvested can be had starting around $3000 per hectare.  But you’d have to wait 2-4 years to start harvesting.  Producing farms with plants in full harvest in the area start to sell for around $5,000-8,000 per hectare.

This week I’ve visited a few 20 hectare sized farms for sale with producing plants for sale in the $6k per hectare range.  So assuming even the low ball figures gathered from friends in the area, that same farm acquired for around $120k could get its money back within 2.5 years.