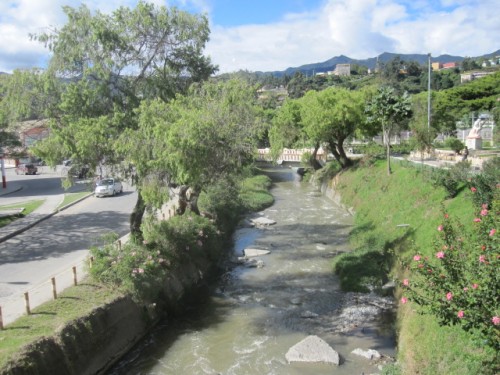 “I’m not going to be taking a shower this week,” I thought yesterday as I arrived here in Cuenca.

The feeling reminded me of last year when I first arrived to live and work in southern China on a bus from the border of Vietnam.

On the bus, I met a friendly (and attractive) Chinese woman who invited me stay in her home until I found a job. What she didn’t tell me on that night bus in her very broken English was how cold it gets indoors in southern China in the winter.

You see, below a certain river in China, the government deems it warm enough that the people don’t need heat in their homes, to save energy, well, it’s not warm enough! In fact, indoors, it’s freezing, especially at night, and the showers are electric heated (like many in Ecuador) which at best are luke warm effectively killing my urges to shower and any chance I had with the woman.

Many nights I had to sleep with a winter coat tucked under a few blankets with a winter hat. It sucked. But I did find a job (in northern China where they have heat in the homes).

Cuenca isn’t that cold, but it gets chilly, especially at night, and again, its one of those places where its just warm enough that most locals don’t bother installing heaters, but people not used to it can get cold.

Cuenca, often mentioned as the number one place to retire in the world, as ranked by the popular International Living Magazine, is in fact a nice, inexpensive place to live with a growing, social expat community… but for many, it’s just too cold and damp.

So where in Ecuador will the international press begin to push when Cuenca gets higher priced or overdone?

Loja is a smaller version of Cuenca about 5 hours south with many of the virtues of Cuenca, even lower prices and warmer weather!

Loja, like Cuenca, is a smaller city with a large town feel tucked in a valley in the Andes Mountains. They both have beautiful old colonial towns, rich culture, friendly locals, and things to do nearby, but Loja is only 1 hour from the Amazon and less than an hour from Vilcabamba which serves for many as a great weekend getaway.

Prices are cheaper too for many things, like the $1 taxis you can take from any point in town to any other point. Lunches around $2. And boy do they have some delicious local delicacies like the Tamal Lojano and Tigrillo. Must-tries!

Unfurnished 2 bedroom rentals start around $300 a month while the purchase price for the same type of property starts around $45,000.

Where are some other warmer versions of Cuenca?

I’d try Paute, a small town 1 hour from Cuenca with a warmer climate. Or the Valley of Los Chillos near Quito, also a smaller town with a slightly warmer climate than nearby Quito due to the lower elevation.