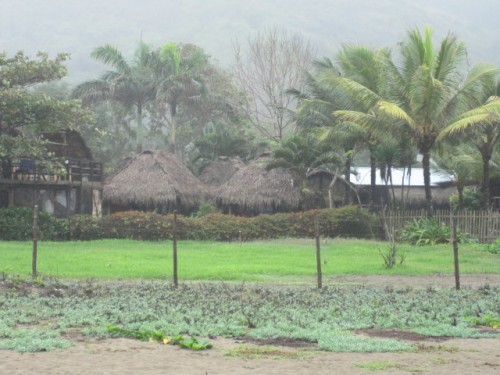 Jeeze, why can’t this ever be easy? I thought earlier today.

I was checking out the cheap beachfront house I told you about in the last update of this series where I walk you through every step of a real, live property deal I’m currently making in Ecuador, you’ll come with me as we go from start to finish or from the buy all the way to the re-sell.

I was a little down cause the house I told you about 2 days ago, and the one I was looking at was “technically” beachfront, but not really, it was kind of far away from the beach although the land separating the house from the ocean was un-buildable do to an estuary or bay area just to the side of the house.

It kind of looked like the house, along with the ones next to it were in a flood plain that may have problems sooner or later.

But the house itself was pretty nice for the low price and you could see the ocean from the front windows.

But I still decided against it.

It doesn’t matter how cheap something is if you’re going to have a tough time finding someone else to buy it.

But I kind of liked the area near Salinas.

So after the sellers of the $21k house left, as I walked out sure enough I found another lot for sale on higher ground, right in front of the ocean I did like.

I called and met with the owner and he said the lot, a beautiful, flat 475 m2 (5112 ft2) lot right on the ocean… beachfront… beachfront… with no busy street in between it and the ocean while also protected by an elevated pitch, was for sale for $6k.

Because that’s where it got tricky.

It was “Comuna” land.

And all he had was a “Right of Possession” (Derecho de Posesion).

Remember those 3 key papers I told you to ask any property owner and check out before buying? The Escritura, Predios and Certificado del Registro.

Yea, he didn’t have any of that.

Let me explain. If this sounds complicated its because it is!

“Comuna” or “Communal” land in Ecuador is common on the coast of Ecuador, especially in the small towns, and its when there are lots that have not been registered in the Municipality that are instead “owned and administred” by the local Comunas which serve like Town Councils and to me are quite socialistic.

While Ecuador is divided into Provinces and each province into “Cantones” where each “Canton” has there own Municipal. Within each Canton in the more rural areas you may have several dozen local Comunas.

Comunas will often gift the land to members of the local Comuna but they can’t give out Titles (Escrituras) while instead they give something called an indefinite “Derecho de Posesion” (Right of Possession).

You probably can own for a long time without problems but remember, you are still not regarded as the legal free hold title owner of the land with only a right of possession.

And for a quick buy-resell it definitely wouldn’t work.

I researched this thoroughly 2 years back on a visit to Ecuador I considered buying a lot right in the center of Montanita which only had a right of possession from the local Comuna.

Some will tell you that you can’t legally attain the Title (Escritura) nor sell Comuna land.

I know several people who have, in Montanita. But it can be a difficult, costly (and lengthy!) process to legalize the property and attain proper Free-Hold-Title (Escritura) as recognized by the banks and everyone else in Ecuador.

You’ll need a document from the Comuna releasing the property to the Municipality which sometimes the more troublesome Comunas (like the one in Montanita) isn’t always willing to give.

Because once you have a free hold Title (A Municipal-registered Escritura) its yours and not theirs. While its still theres whenever there is a change in ownership you must do it through them having the Comuna board of directors sign off on the sale and they charge a hefty fee (usually around 20-30% of the purchase price) but few buyers tell them the honest amount they paid.

I, like most foreigners and locals in Ecuador, will advise you to only buy property that has proper title (Escritura) as described in my last email.

But as one local told me once, sometimes the price is low enough that you might want to risk it.

What’s the worst that could happen?

Easy, the Comuna could make some excuse to take the property back from you. But its not common.

What will I do?

You’ll find out soon in the next email of this series.