“So this is how Pablo Escobar felt.”

I thought as I sipped my martini on a yacht floating over emerald-green water talking to the owner and a few other powerful local players. 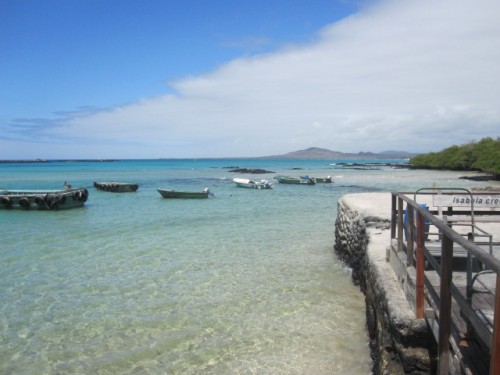 Referring to Escobar because he was a rich guy living in Latin America, and he’s the first to come to mind… drugs aren’t my thing.

This week I’m checking in from THE ONLY place in Ecuador that attracts “high rollers” or the kind of people that drop $10,000 on a week long cruise…

And it’s the ONLY place in Ecuador with snow-white beaches and a Caribbean-like, turquoise ocean.

Many locals are rich, but it’s NOT off the drug trade… it’s off tourism, because this is a place many MUST see before they die.

But you’ve NEVER heard it mentioned as a possible retirement destination… anywhere… until now.

Opportunities are a plenty in the Galapagos.

-Land-based tours. One of the biggest I see involves the new trend of “land-based cruises” or tourists that decide against the conventional cruise boats and decide to cruise by day and sleep at night on land in a hotel on different islands. The good hotels are few and far between, one hotel manager I talked to proudly boasted they have an 80% occupancy ratio and often much higher (They charge over $200 a night and have over 20 rooms).

-The Asian market. The Asian market is a big unexplored opportunity for the Galapagos as I notice more and more Japanese, Koreans and Chinese are coming. It is far, but they would all LOVE this place… the up-close-and-personal animals is not a common sight for them almost anywhere in Asia (this year I spent 4 months working in China).

-Alternative products. In the Galapagos everyone sells one thing, cruises. That’s where the money is. But I’ve found a big lack of alternative ground-oriented products that could be sold as interesting complements to the 4-7 day cruises. For instance, jeep or 4×4 tours would be an interesting idea.

But due to the Galapagos’ status as a National Park there are strict restrictions on foreigners buying property or starting businesses.

Foreigners can only stay 3 months a year on a non-renewable tourist visa making the Galapagos a great “3 months a year” temporary retirement destination but a tricky permanent one.

Also, “Outsiders” can’t buy property in their own name or start businesses.

Locals have a virtual monopoly over the market.

But I found a loop-hole…

Discover it signing up for my Weekly Ecuador Insider´s Newsletter, you can unsubscribe at any time: